Today You Might Just Find A Court Reporter Isn’t Merely A Typist...

8 Traits Of All Star Court Reporters (hint: not just typing) 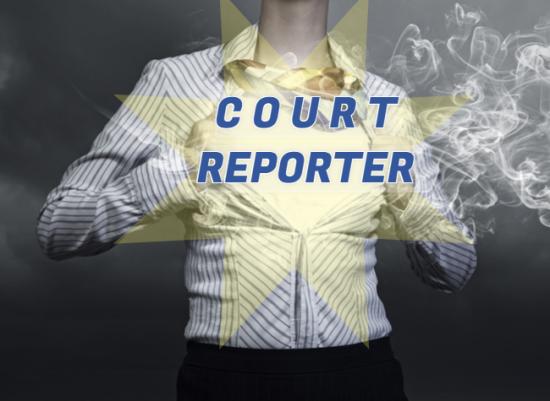 Do You Have What It Takes To Perform Like The Best Court Reporters? From the most recent notorious Bill Cosby trial to stoicism and cheetah-like reflexes, we have highlighted just eight of the traits that high-performing court reporters share. Let's dig into a few of the special super powers that make court reporters the unsung heroes of the courtroom.

As if accurately transcribing a lengthy court proceeding with laser precision at faster than light speeds - at least it may feel like that - isn’t enough, Montgomery County Court Reporter Ginny Womelsdorf commanded the spotlight for nearly 90 minutes last week in Bill Cosby’s high-profile sexual assault trial when she was thrust center stage asked to read back the testimony of three witnesses.

She read over 30 minutes during one recitation and close to an hour during the next with virtually no breaks, save for a sip of water. Imagine spending an hour transcribing verbatim full force for nearly an hour then having to immediately dictate that hour back to the court. You’d be hard-pressed to find a court reporter who can tackle this behemoth of a task better than she.

#2 Your Court Reporter Is Secretly An Extrovert

Transitioning from the comfort of an “unnoticed fly-on-the-wall” to the center of attention in the highest profile case of your life is a lot of pressure, to say the least, but what are some of the daily challenges you can find a court reporter silently dealing with in every courtroom across the country?

You’ve probably tried to write everything down on a “very important” subject in a college class once. Your pencil scrawling across the notebook (not to date myself too much) or your fingers clicking away on your laptop, I’m sure you quickly realized how difficult it can be to keep up. You might have thrown the notebook aside and opted instead to record the lecture. But what if that transcript was a requirement?

Yes, it’s true that court reporters utilize shorthand and type in a sort of code to keep up with the 300 words per minute being spouted in a court proceeding, but let’s throw in another level. Imagine typing at breakneck speeds while attorneys yell over one another, someone is losing a lung to a coughing fit on one side of the courtroom, the witness is mumbling incoherently and her nerves are propelling her speech into warp-drive.

Shorthand notation or not, this is a harrowing endeavor. Now, let’s layer on another! You’re tasked with the responsibility of realtime court reporting. That is, every stroke on your stenotype is transmitted to screens viewed by the judge and/or attorneys.

The speed at which speech unfolds coupled with the ever-present stress on your reputation would send the strongest minded individuals’ heads spinning. Here’s a little secret: inside that calm, collected demeanor is a peak performer dominating a high-stress job.

Court reporting in cases with expert witnesses can be kind of like a recurring college nightmare wherein you have just walked into a class and are forced to give a demonstration in a lecture hall to hundreds of people on something you have never heard of in a language that doesn’t exist in order to graduate.

Expert witnesses can present a huge challenge when speaking in technical jargon. Everyday words and phrases for them - Floccinaucinihilipilification - that are once in a lifetime encounters for most, come spewing from their mouths in rapid succession with little concern for clarity.

Sit steady in a chair with your arms out, elbows bent, palms arched, hands down as if you’re typing. Now hold. A court reporter is fighting two battles: overlapping and unintelligible speech while trying to produce an accurate record, and a he’s in a fight with his body forcing every discomfort to the dark recesses of his mind while he tries to stay in the action and never misses an utterance.

Sitting in a courtroom, shifting and leaning from cheek to cheek while you just watch is hard enough. Try to capture every syllable pronounced and you’ll find yourself in a battle to keep your body and personal needs in check while focusing on the proceeding at hand. Make sure to remain professional while doing it. No smirking, frowning, or obvious and distracting facial expressions. Stoicism is your friend.

#7 The Rock Solid Focus Of A Munk

For the consummate court reporter, listening to some of the most ridiculous phrases ever uttered in a courtroom cannot be any match for his focus and professionalism. Tune in your ears, blank your mind and let your fingers do the walking.

A court reporter must shed his physical self and channel the spoken word into the official record. It becomes a meditative practice at times, like sitting behind the steering wheel and mentally blanking-out as you transport yourself home with little to no memory of having done so.

#8 Can Leave All Preconceptions At The Door

A court reporter must enter in and out of a state of flow making sure not to pass personal judgment and risk distracting himself from the task at hand.

The job of a court reporter is varied and at times intense. Within the stoic demeanor lies a caged ball of energy neglecting every aspect of personal comfort and sanity to produce a pristine, accurate official record.

Quiz: Do You Have The Skills To Be A Master Court Reporter?

Maybe you don’t need to find a court reporter for the next trial of the century, but if you are in search of a qualified stenographer it’s important that they have the mental fortitude to keep up with the rigors of the job. If You’re looking to be the next Ginny Womelsdorf or Janet Moxham you might need to consider:

#1. Can You Command A Room When Required And Keep Your Thoughts To Yourself?

#2. Can You Withstand the Physical Toll With Statue-like Stoicism?

#3. Can You Rank Among The World’s Fastest Typers, while stamping out words like “euouae”

Click here for more information on realtime court reporting and find out how you can easily book your realtime ready court reporter today.